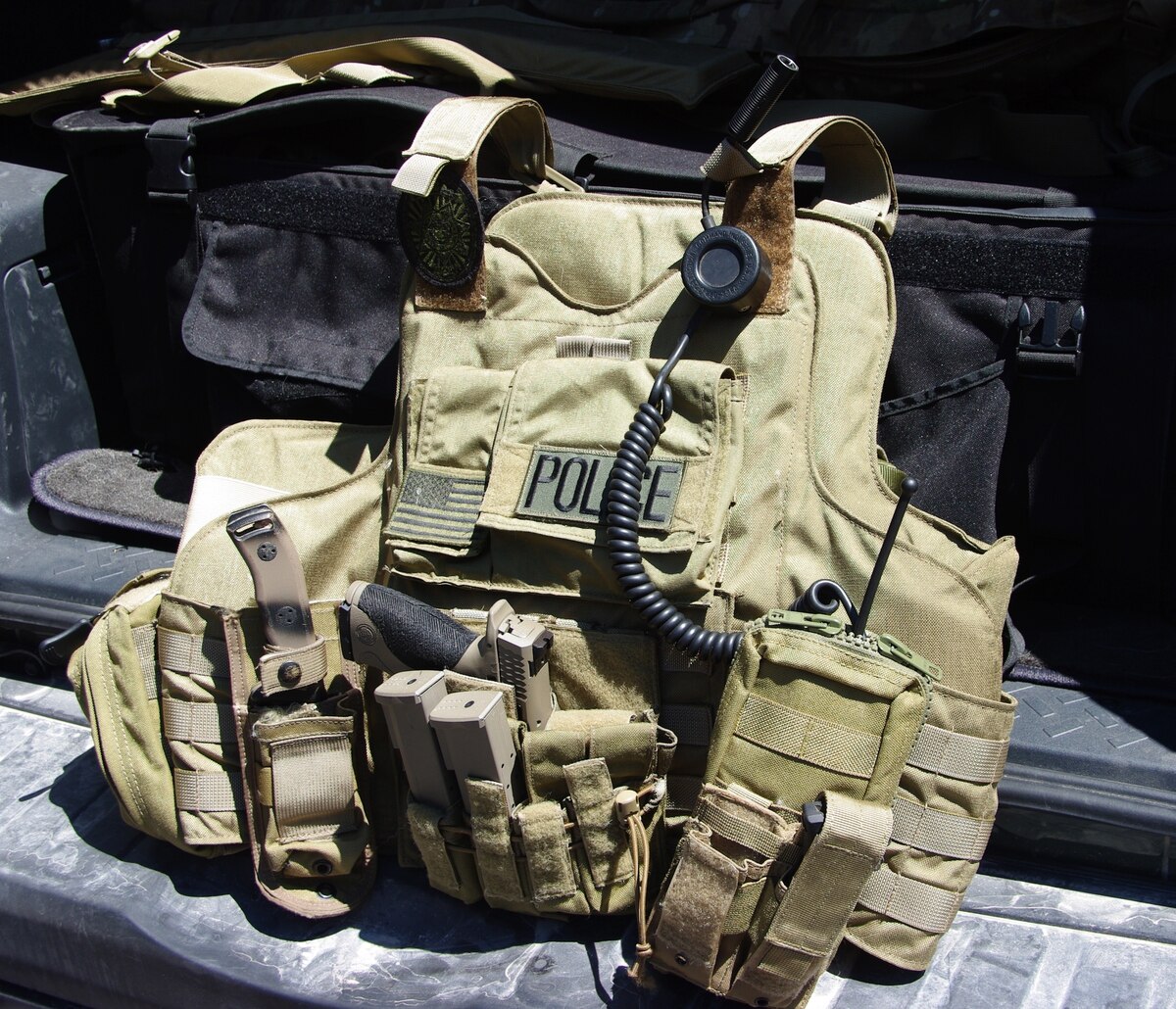 Strapping on my first “bullet proof vest” in the mid 1980s was a bit different than my current equipment.

It was a hand me down from a fellow deputy, a Second Chance vest.

They were the ticket back then, the owner demonstrated his product by shooting himself or getting shot with a .357 Magnum while wearing it, not too smart for sure, but it sold product.

Second Chance saved a bunch of lives back then in an era where body armor was anything but mandatory. Crude by today’s standards, it was heavy, bulky, uncomfortable and hot in the summer but it worked.

Every time I hear an officer complain about today’s vests, I just think back to those days and shake my head.

Well, times have changed and body armor is better than ever.

NIJ / So what does it stop?

The National Institute of Justice has been providing voluntary standards of protection since the 1970s and remains the only proven standard for measuring a materials effectiveness at stopping penetration and reducing blunt trauma injury. If the armor has not proven to meet or exceed these standards (0101.6) don’t buy it.

The process to meet them has changed a bit over the years, mostly in how they are measured and what is considered acceptable. But armor meeting the NIJ standards provides better protection than ever.

Level 2A stops 9mm and 40SW — mostly from shorter barrels (4 inches and under).

Moving to level 2 adds .357 Magnum to the list. Most under garment vests are level 3A adding 44 Magnum and longer barreled pistols. But none of these stop rifle ammunition.

You can reach 2A-3A using soft material that can be worn under or over your clothes. Level 3 requires a trauma plate or hard plates that can stand alone or sit in front of soft body armor.

It is rated to stop up to 7.62mm (.308) soft core ammunition. Level 4 adds steel core (armor piercing) to the equation and requires hard plates made of differing materials — ceramic is still common. Many require 3A soft armor to achieve their rating, but can be “stand alone” plates.

Stand alone plates can have less coverage to meet the standard, and can still be placed in front of soft armor. Many of these plates are covered in a soft armor material designed to stop spalling and contain fragmentation regardless of rating.

It’s critically important to note that typical self-defense and practice bullets are considered blunt instruments, and armor is designed to protect you against blunt trauma.

By design, vests spread or dissipate the energy transfer over a broad area; one of the reasons hard plates sit outside the soft material, the plate stops the bullet the armor protects against the trauma.

Soft armor will not stop most “sharps,” including cross bolts, arrows, knives, swords, spears, or similar objects. Some are made with protection against slashing cuts, but the laws of physics remain intact — stopping those things requires hard armor.

All are defeated by velocity (including bullets) without regard to size or caliber. Surpass the velocity threshold of any of these levels and it will penetrate. Multiple hits and the closer to the edges of protection the less effective they can be.

And just like warriors of old, enough blunt trauma can still cause serious injury or death — still better than no protection, but nothing is 100 percent or perfect.

Kevlar, Aramid, and all the rest.

Most soft armor is made of a woven fabric using various materials.

Some of the most common are Kevlar (DuPont) and Twaron (Teijin) and are synthetic fibers that hold up well to moisture and heat with a high strength.

Spectra (Honeywell) and Dynema (DSM) are a refined polyethylene, making them very light weight and strong with approximately 15 times the strength of steel. Manufacturers are constantly trying to increase the strength to weight ratio.Guardian Plate Carrier Package with Armor, starting at only $239! Made in the USA

Making a vest super strong is great, but if it’s equally as heavy no one will wear it. Conversely an incredibly light and flexible vest that does not work, or only works on the margins is deadly. Perfecting these products is a constant dance between science, art, utility, function, and to a certain extent, fashion.

Hard armor remains primarily some form of ceramic and or Polyethylene that may be blended with other “proprietary” materials. Trade secrets abound in one of the most competitive markets in the industry, so precise concoctions are top secret.

Steel is still used, it offers less thickness but remains heavy and less capable of protecting against multiple hits. Common plates may withstand several hits but there is a limit as the material breaks up the next round may penetrate.

Nanotechnology and work with next generation fibers is on the rise and looks promising. Often resembling chain-mail, these products look to provide protection against multiple hits. Still in the testing phase, they will most likely see use in combat first, but the industry is constantly improving.

It’s all in the Cover!

The fiber material is anything but rugged, it must be covered for any long term use.

The base material is generally contained in its own permanent cover then inserted in the outer vest. How your internal or external cover is configured will determine things like comfort, usability, and ruggedness.

Vests worn under your uniform are typically contained in fabrics that are smooth, light, and protect against sweat, dirt, and wear — almost athletic. Given today’s long list of state-of-the-art fabrics, the sky’s the limit.

Just remember, it’s just an outer skin. How cool it looks may not translate to comfort, and if it contains substandard armor, it won’t protect you.

Armor worn over your uniform or other clothing can range from simple to complex.

The simplest hold plates and provide attachment for a few pouches. These allow you to wear plates alone or over your existing soft vest giving you the option to only use the plates when needed.

Others have soft armor with plate pockets providing hard and soft in one cover and tend to be heavier. Common in Europe and growing in use here, they may look just like a uniform shirt.

Some prefer outer carry — properly fit, it’s easier on the back transferring much of the weight to the shoulders. Pockets can be fixed, most use some sort of attachment system. MOLLE is still out there along with numerous variations on the same theme, they all carry stuff, just differently.

The most critical aspects are weight, how well it moves and proper fit.

Get a trained professional to measure you and fit you properly. Improperly fit vests are uncomfortable and you won’t wear it.

Sit a ton? Make sure to take that into account. Coverage is critical but only if you will wear it, proper fit makes that possible.

Stiff vests hinder movement and companies are making these carriers lighter, softer, and more comfortable every year. Always a balancing act, it depends on your use.

Having coverage on shoulders, neck, and groin sounds safe, but not if you are a turtle in a shell and cannot move.

Some interface with packs, other kits, and accessories providing more interchangeability for different missions. If you need that get it; if not, a simple vest with the pockets needed will cost less and still provide the same levels of protection.

Just make sure it fits and weighs as little as possible while providing proper coverage.

Body armor is currently 50 state legal and available for purchase by most anyone. Federal law prevents those convicted of violent felonies from possessing it.

States can require you to buy it in person, or enhance sentencing when used in a crime. Several companies won’t sell their armor to anyone outside Law Enforcement or the Military, but that is a business decision, not a legal one.

Bottom line, it is legal for law abiding citizens to own and use body armor and highly recommended in many situations.

Just because it is expensive does not mean it works better. It either meets the NIJ standard or not. Cost is mostly in the outer vest, how it fits, what it carries and its construction.

Better, lighter, and more comfortable material will cost more, but will not protect you beyond its NIJ rating.

But the older it is the greater the risk. This applies to actual body armor, NOT flack vests from the 1970s that weren’t designed to stop bullets in the first place.

Vests worn under clothing are exposed to sweat, chemicals, dirt and the like and can lose effectiveness. Agencies need to replace them regularly.

Vests that have taken fire are one and done! Just because they can take multiple hits does not been they can be used after taking one.

Body armor is a tool that has saved hundreds of lives since its introduction. Costly up front, it is priceless when you need it — kind of like your concealed carry firearm.

Similarly it is a lifestyle, not something that is natural to wear or easy over time. If you wear armor make sure you practice with it using your duty or carry firearms, it takes some getting used to but it just may save your life someday.

Costs range from a few hundred to a few thousand, just keep it to what you need and it will be worth every penny.