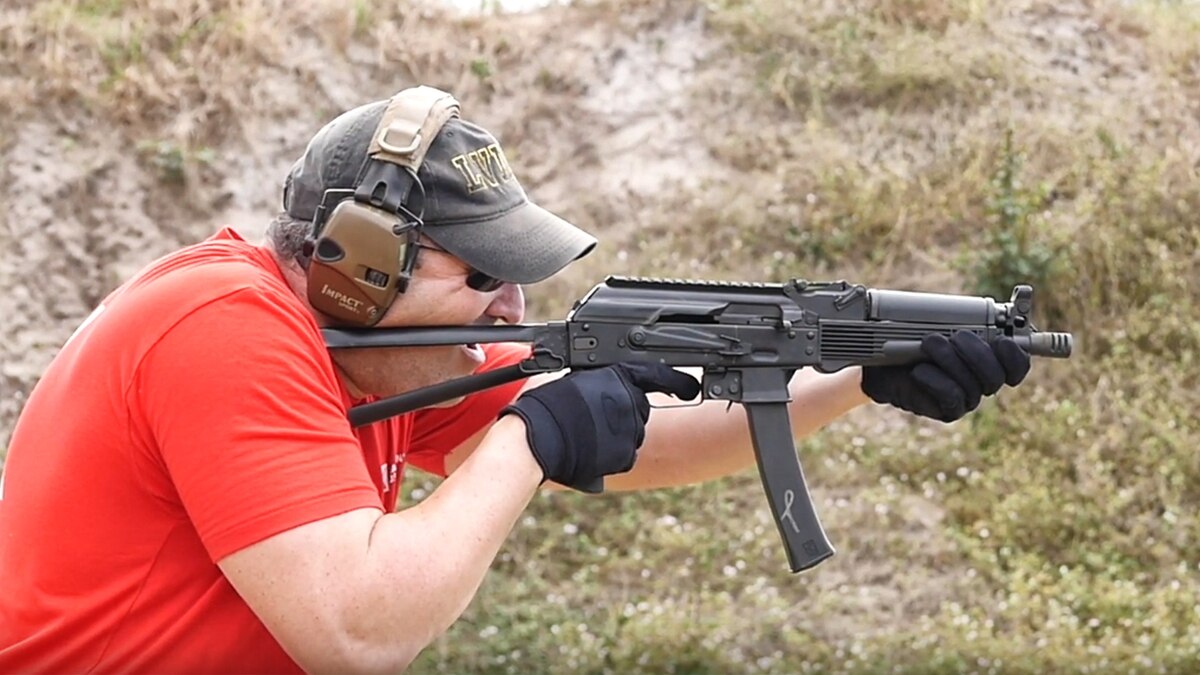 Towards the end of June, the Texas Department of Public Safety held a vendor showcase at the DPS Tactical Training Center in Florence, Texas.

Among the attendees were FN America, SIG, Daniel Defense, and… wait for it… Kalashnikov USA!

According to a post on KUSA’s social profiles, the Florida-based company brought over two distinct platforms for Texas law enforcement professionals to try out at the event — two shotguns and a short barrel rifle.

The caption that went with the post made it amply clear what KUSA’s mission in Florence was: “We wanted to demonstrate our firearms and make strides in the law enforcement market.”

First off was the KR-9 SBR, which seemed to be a big hit. Built in America, this 9mm gun features a top rail for optics, a 9.25 inch barrel, and is based on the Vityaz-SN submachine gun designed by Kalashnikov Concern and used by Russian special operations forces.

The KR-9 feeds from 30 round double stack magazines, and uses a skeleton folding stock. Per videos on KUSA’s social channels, a select fire version of the KR-9 does exist and is probably one of the guns the company marketed towards potential Texas law enforcement clients.

The KR-9 would likely be marketed more towards SWAT teams than patrol units to serve a similar role as the legendary Heckler & Koch MP5, which is still in widespread use today.

KUSA’s Komrad 12 gauge short-barreled shotgun and the KS-12 were the two semi-automatic scatter guns Texas law enforcement officers tested out at the event.

Based on the Saiga series (another Kalashnikov Concern product), the Komrad is also manufactured in America and features an adjustable grip, plenty of upper rail space for both optics as well as side rails on the fore end for flashlights.

The Komrad uses a 12.5 inch barrel and an SB Tactical SBA3 pistol brace, while the KS-12 uses an 18.25 inch barrel and a fixed stock. According to KUSA’s website, both guns can accept most accessories, as well as box and drum magazines originally built for the Saiga series.

While this is fairly uncharted territory for KUSA, there, oddly enough, already exists a very limited precedent with a handful of law enforcement agencies across the United States which presently utilize AK-patterned weapons.

According to The Firearm Blog, police officers serving in North Slope Borough, America’s northernmost formal community (north of the Arctic Circle) use a mix of AKs as their standard patrol rifles. The durability of the weapon, especially in cold and unforgiving northern climates, as well as the range and polar bear-mitigating punch afforded with the 7.62×39 round seemed to combine to make the platform a winning candidate for that particular agency.

After some research, TFB also came across three other agencies which either allow officers to use AKs as service weapons, or have SWAT units optionally equipped with Kalashnikov derivatives.

Even still, whether or not KUSA will be successful in their attempt to bite into the law enforcement firearms market, currently dominated by other weapons, remains to be seen.

At the present, most agencies which issue a service rifle to their officers typically go for an AR-style rifle, or a military-surplus M4 carbine. As a result, the market is heavily slanted towards AR manufacturers. In addition, while semi-automatic shotguns have been slowly gaining in popularity, most police departments tend to rely more upon pump-action shotguns.

However, the market for 9mm carbines and submachine guns still remains fairly open, and that could potentially be where KUSA makes a winning move.